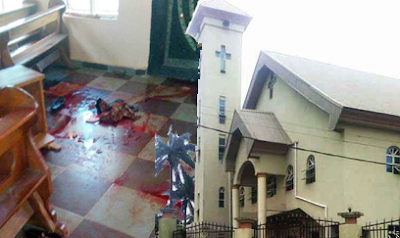 August 6, 2017. A church, St. Phillip's Catholic Church in Ozubulu, Ekwusigo Local Government, Anambra State, turned into a killing field, the very morning of the day Catholics were reflecting on the Transformation of Jesus Christ. Masked gun men made a gruesome call.

Their target was, reportedly, a young multimillionaire, a barely 30 year old drug baron, who singlehandedly built and donated the church. An ornate place of worship with an alter that was consecrated by a Catholic bishop. After spraying bullets into the over 100 worshippers, they left in their bloody wake, eight battered corpses and many other folks, seriously wounded. It was a horrible blood bath.

Police says investigations are on but it is highly suspected that the senseless violence was ignited by vicious drug gang wars of Nigerians plying illicit drug dealings in South Africa.

August 4, 2017. A bunch of politicians, of the rapacious Nigerian brand, members of the Ebonyi State House of Assembly reportedly approved buckets of money, a neat N2.5 billion, sought by the State Governor, David Umahi, to construct the first phase of an Ecumenical Centre for Christians in the State. No one is quite sure how much the second phase will cost.

The Leader of the House, Joseph Nwaobasi, is reported to have made this strange statement of delusion: "The initiative would draw majority of the citizens closer to God and when the Centre is completed, an individual experiencing any difficulty would easily turn around and access the centre and ultimately the problem would be solved". A joke. 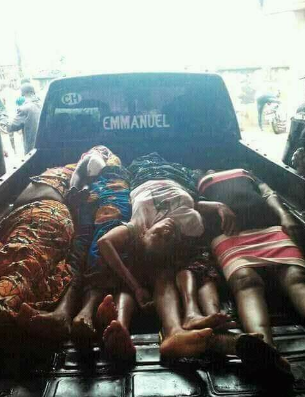 May 28, 2017. Just three months before Ebonyi State embarked on building its ecumenical centre, another politician, also of the peculiar Nigerian hue, Nyesom Wike, Governor of Rivers State, answered to the dubious claim of divine urge to commission a multimillion naira Ecumenical Center for Christians in the state. It is interesting that no report was made of the exact amount expended on that waste save the grey "multimillion".

Wike was delivering on a promise he made five months earlier, in January, to the General Overseer of the Redeemed Christian Church of God, Pastor Enoch Adeboye, to donate an ecumenical centre to the Christian Association of Nigeria (CAN). As it turns out, it is the same Pastor Adeboye, to whom the Governor handed over the Center's certificate of occupancy.

The "Christian" Governor Wike then declares Rivers State, a Christian State. He says the Center is a place of worship to all denominations that will serve as a centre of unity. Another bizarre joke.

Pastor Adeboye expectedly prayed fervently for Wike, praising his initiative to build and donate the magnificent ecumenical centre to CAN. Adeboye said: "Wike has achieved a feat that none of his peers had done since Nigeria was founded," adding that Rivers State was "marking her new season, so shall God begin something new in the lives of Wike and his family" praying God to build a wall of fire around the governor and his family. I wish the Pastor had said the Governor had achieved the feat of lifting millions of Rivers State citizens from poverty, I would have rejoiced. But I guess it is just a joke.

The CAN Chairman consolidated the deception saying that "the centre would be a place of sanctuary for the needy and used for the promotion and expansion of God’s kingdom in the state." 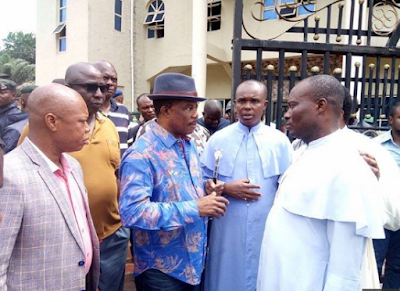 Two images jumped to my mind when I ruminated on these stories of religiosity, of criminals and politicians dubiously playing spiritual leadership. There was in year 2000, the religiosity of establishing Sharia in Zamfara State, by Governor Sani Yerima, a politician of the Nigerian hue. It turned out a hugely disruptive deception. The ripples continue to afflict the nation today.

The other image is that of The Basilica of Our Lady of Peace in Yamoussoukro, Côte d'Ivoire, built by President Felix Houphouet-Boigny, a politician of the African breed, at crushing costs estimated between $175 to $600 million, from 1985 to 1989. The 30,000 square meters Basilica which can take 18,000 worshippers at a time, sits smack in the President's village. It is dubbed the "Basilica in the Bush" with the hare-brained promise to be a pilgrimage site for all African Catholics. A wasteful exercise. The slave masters can't allow that.

These fervent building of places of worship are, in the main, executed in the huff of buffoonery, political expediency and darkness of religiosity.

The cocktail of hardened criminals and vicious politicians and religiosity church leaders with huge sums of money to build houses for their "gods" is toxic, often ending in catastrophes. The Ozubulu massacre is a bloody reminder.

When money rules the heart, it festers evil. Imagine what N2.5 billion would do as a revolving loan scheme for small scale enterprises that will grow thousands of the dirt poor in Ebonyi State. But the Governor is burning the pile of money on a Christian Centre. In Rivers State, Wike is playing Christian emperor building and funding Christian activities. Do our politicians and religious leaders have a clue of the humongous suffering and acute poverty under which millions of the people labour? Is it the ornate and massive worship centers and sponsorship of pilgrims abroad that will provide jobs and decent living and lift the people from poverty? 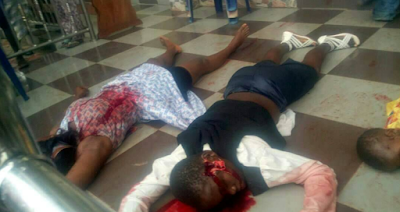 It is not about mighty edifices. Throughout the Bible, God only ordered the building of the temple in Jerusalem. Jesus Christ did not order the building of one synagogue or church. God Almighty is not interested in these earthly architectural facades and boisterous display of pious wastefulness at the expense of His flock. He desires a contrite heart. The scriptures say of the Lord: "For thou desirest not sacrifice; else would I give it: thou delightest not in burnt offering. The sacrifices of God are a broken spirit: a broken and a contrite heart, O God, thou wilt not despise." Psalm 51:16-17

Jesus said: "This people draweth nigh unto me with their mouth, and honoureth me with their lips; but their heart is far from me." Mathew 15:8

When men dream madly of power and money, their hearts and ears and eyes become hardened and dulled. They fail to see the disastrous impact of their greed. The civil decay, the moral decadence, the sprout of criminality, of poverty, of insecurity and mushrooming of evil.

It is time our people wake up. Time for "men of god" to rise up to their spiritual not religiosity responsibility. To turn away blood tainted money. For integrity. For the sake of our brothers and sisters murdered in the morning of August 6, 2017. May their souls rest in peace. I mourn sorrowfully. For them. I mourn for this country.
Share on Facebook Share on Twitter Share on Google Plus