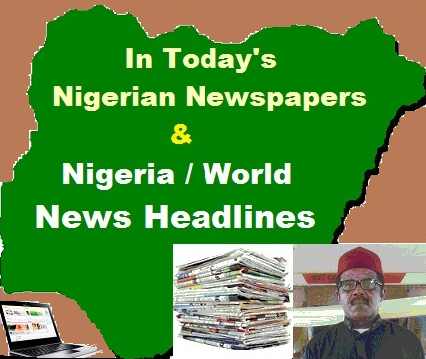 The test of leadership in people, is in their vision, not as demagogues, but in nobility, not as purveyors of hate and division but as drivers of core values and shared humanity.

Nigeria has an abundance of demagogues. It lacks leaders. It has no leadership. That is the curse of the Nigerian condition. Those we call "leaders" are in truth demagogues, bereft of vision and nobility. They are the drivers of hate and division. From the podium to the pulpit. Ask them what the core values of this country are? You get blank stares. No clue.

Our "leaders" agenda is not equality and prosperity of citizens of the country. No. The agenda is SELF. It is the exploitation, as serfs and canon fodder, of the people, with the vile weapons of raging hatred and division, of sharpening the differences of region and religion into swords of bloodletting.

Look at our landscape today. Look adebate is bitter and laced with the arsenic of destructive rhetoric. War is burnishing its cannons. Wisdom is sitting on our street corners mourning the mutual destruction, of the crimson rivers of blood and of the utter desolation to come. The augury speaks of dark cumulus clouds, heavy with acid rain gathering in the heavens over the land. But wisdom is ignored by this generation of "leaders" callous and rapacious, lacking in nobility and vision.
t it. Rivers of bile are flowing from mosques and churches. From the inner cities to the villages, hatred, fierce and hot, is billowing. On social media to beer parlors,

This is a country without defined and shared core values. What do we fight to keep hallowed, as the rallying cry, for our shared humanity as a people, as Nigerians? Nothing. Absolutely nothing. Some voice the inanity of a unity that is not negotiable because they have bullet wounds and horror pictures of the civil war to show off. But they are at best and in secret places, no more than tribal champions who fiercely tear and fray the fragile garment of the very national unity they airily profess in public.

These generation of "leaders" callous and rapacious, lacking in nobility and vision ignore Wisdom which is sitting on our street corners mourning of the mutual destruction, crimson rivers of blood and utter desolation to come. All shall weep and gnash their teeth in the torrents that shall break the barriers and lay to waste the land. The terror shall break their teeth and in the grave their foolishness shall mock at them.

Wisdom advises that the desolation to come can be stopped. If only the land has leaders, noble and driven, who can answer these questions in spirit and in truth: Who are we? What are our core and sacred values as a people? Why are we so naturally blessed yet so cursed by rapacious and greedy "leaders"?

Let us take a page from the words of Hilary Clinton, former secretary of state of the United States, in the wake of yesterday's violence that erupted from the white supremacist rally in Charlottesville, Virginia. She called on the leaders to speak out, take action and prove that “this is not who we are as Americans.”

She said: “The incitement of hatred that got us here is as real and condemnable as the white supremacists in our streets,” adding that “Every minute we allow this to persist through tacit encouragement or inaction is a disgrace, and corrosive to our values."

Many may not like Clinton for some of her religious or political perspectives. But none can deny her Americanness. None can argue that she is not a patriot or that she is not American first before she is white. That is wisdom. The demagoguery of tribalism and greed of self that pervade our land is foolishness. It is the inexorable dance of the buffoon, lacking in wisdom, driven by selfish lusts, to self destruction.

Who are we? What are our shared values? Where are the noble leaders of vision who can hear and see, who can rally leaders and the people to stand at the barricades against the Barbarians and Demagogues who call themselves "leaders" but who feast on hatred and division, tearing away at the fragile garment covering the nakedness of the motherland?

Wisdom is sitting on our street corners mourning of the mutual destruction, crimson waters of blood and utter desolation to come. But wisdom is ignored by this generation of "leaders" callous and rapacious, lacking in nobility and vision.