Home / local / Folks Mocked Charlie Boy, 66, Who Was Gassed And Beaten By The Police! By Ken Tadaferua

Folks Mocked Charlie Boy, 66, Who Was Gassed And Beaten By The Police! By Ken Tadaferua

Some folks are mocking Charlie Boy, 66, who was gassed and beaten by the police, drunk with impunity, for organizing a peaceful protest in Abuja. 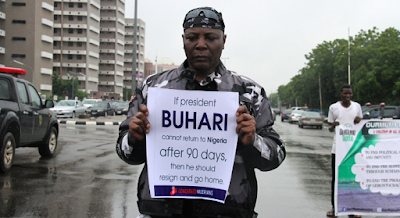 But why really are they mocking Charlie? That the constitutionally guaranteed freedom of peaceful protest was so brutally and wantonly disdained? That a 66 year old man had the presence of mind and is sufficiently enraged, by inanities of those in power, to organize a protest in a country where millions of citizens, especially youths, live in abject poverty and joblessness yet cannot organize a protest against their oppressors? That they are too busy hustling for crumbs to waste their time to fight the system? That the courage of Charlie Boy makes them look like "efulefus" so beating him gives them a false aura of superiority?

I don't understand. The country is going to pieces. We bellyache. But we take no action. We can't organize our own nuclear family not to mention a civil protest group. Then we come on to social media with the puffed up chest of the cowardly and scrawny cock to crow against and mock those who are bold enough to stand up for what they believe in. Then we slink back to the hell hole we crawled from, to hope and pray against a sure, un-song and ignominious death.

The cockroach said to the mongoose who dared the cobra: "Thank God I am too smart to go out to confront a cobra." But that is until it is swatted to death in its dirty, dingy and smelly hiding hole.
Share on Facebook Share on Twitter Share on Google Plus