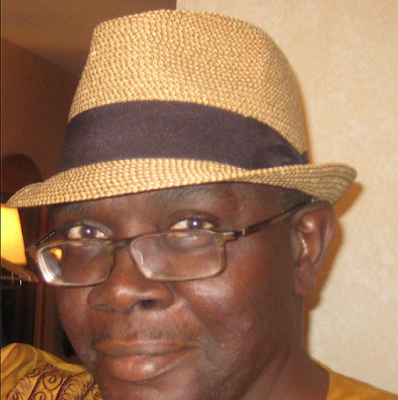 One of my long time friends is the very popular football, and indeed, sports aficionado, Godwin Dudu-Orumen. His prodigious produce in sports development makes me proud. Very proud. But that is not why

I am writing this.

Here's why. I chanced upon a heated debate over where my friend comes from. One group swore that he is undeniably from Delta State. The other group held tenaciously to the view that Godwin, who I call Dudu as only his very old time paddies do, is from Edo State. Which group is correct?

To answer this question, because I know Dudu back to his roots, I will tell a little history of a boisterous town called Sapele. It is probably Nigeria's earliest cosmopolitan and metropolitan town. It housed the then biggest timber and plywood company in the world, the African Timber & Plywood Company (AT&P). It had, decades ago, one of the most active and thriving ports in Nigeria with offices of shipping multinationals in the town.

Sadly Nigeria's visionless leadership has murdered both the AT&P and the Port. It was like a beehive and attracted Nigerians from across the country to fruitful and profitable jobs and businesses. It quickly achieved a rich blend of cultures, languages, and a peculiar lifestyle that is bold, colorful and egalitarian. Indeed, it is the only town in Nigeria, not even Lagos or Abuja, where its major roads are named after the tribes that infused into the bubbly peoples that yet identified themselves as Safi paddies rather than by tribe. So until today, you have Yoruba Road, Hausa Road, Ibo Road (now Okpe Road), Itsekiri Road, Urhobo Road etc.

The main language of this dynamic chemistry of the town which remains the best exercise ever in unity living, was and still is Pigeon English that has become the rave of wannabe Safarians across the country in drama, movies, music and street lingo.

Now, what has Dudu's origin to do with this short history? A lot. His father, Chief G.M.B Orumen, an illustrious medical personnel, is from Oke Old-Site, in Ora Owan-West, Edo State. He was among the folks who flooded into Sapele in the 1950s and 1960s in search of greener pastures. He settled down quickly and then a beautiful young Itsekiri damsel from Koko caught his eyes. Dudu among several other children are the fruits of the marriage that resulted.

Chief Orumen wanted his son to be grounded also in the ways and culture of his home town. So after primary schooling in Sapele, Warri and Benin, as the wont then to follow transfers of the father, Dudu was sent to Holy Trinity Grammar School, Sabongida-Ora for his secondary schooling. He is today the Chairman of the School's Old Boys branch in Lagos. John Orumen of AIT Television Station is his cousin.

So to answer the question posed above, it is factual truth that Dudu is from Oke Old-Site, in Ora Owan-West, Edo State. All the same, even as we from Sapele accept that Dudu is from Edo State, any one who has lived in Sapele na still Safi paddy. To us, his paddies and heavy boguns, our guy na our guy. No shaking.

When Dudu was a little boy, he was like a typewriter when talking sports. Little did we know, the trait was foundation for an illustrious sports career. O boy, Dudu been sabi talk. Shuooo, he could talk anybody down into the ground. Indeed at about 10 years old in 1969 he was at Ogbe Stadium to watch the historic match between Brazil's Santos featuring Pele and the Midwest football team. Now, see how he has grown into an urbane and correct galamucus and entrepreneur with solid resume in sports. Check am out naaa!!!!

Today, Dudu is the proud promoter and owner of Sportshaq, that sumptuous watering hole and first sport bar in Nigeria. It blazed the trail of the hundreds of sport bars littering the country today. He was the presenter and executive producer of The Best Of Football, a multiple award winning, NTA television sports program that ruled the airwaves from 1993 - 2009. He is currently the founder and rector of Cowbell Football Academy with 500 participants in four centers across the country.

His in-depth knowledge and informed opinions on sports have greatly impacted on sports policy at both national and local government levels. He is a creative and formidable work horse. And where integrity matters, he is your man. Guess what, he is also a lawyer. So for weighty legal advice in sports matters, you have him too. He is a walking dynamo.

My guy, all your heavy boguns dey hail as gist done tear ear say our paddy birthday na this Friday, August 11. We dey come hammer for Sportshaq for Surulere, so make you prepare correct because we no wan hear tori. Fill the bar abeg. We dey come shack for Sportshaq. All paddies go gather to come chop on top of the head of this Edo boy wey we train for Safi. I write this tori to confirm Dudu roots to those wey dey debate and to hail Baba God for am as e dey knack another glorious year. Him wey God bless, no one fit shake. Na so e be.