The Senate President, Bukola Saraki, said if some businesses are getting that concession, as claimed by the Hajj Commission, then pilgrims also deserve it."

Senate has called on the CBN to, as a matter of urgency, extend N200/$1 concessionary exchange rate to holy lands pilgrims as recommended by the National Hajj Commission.
- News 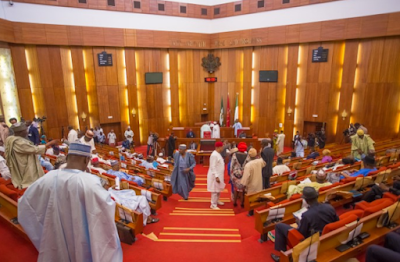 This is mad country. The current exchange rate is N365/$1 even if the official rate is a pretentious N315/$1. This, therefore, is a blatant and shocking N165 concession for each dollar of the millions some well fed elite is to spend going on pilgrimage abroad. A concession that must run into billions of Naira. A public burden, heavy, unexplained.

They fly off from their country where 70% of citizens live below poverty line. They leave a land where millions of women and babies die in childbirth, in malaria and other preventable diseases, where millions are jobless, where millions have no food to eat, where there is no medical care for the millions who lie down and die in neglect. A land of corrupt elites and politicians. A land of ruthlessly greedy religious leaders and elders and leaders. They walk through the slimy gross into gleaming planes to go pray in Mecca, Medina, Rome and Jerusalem.

And we give them a concession of N165/$1. For what? For praying for us? Is there any commandment or ordinance in either the Koran or the Bible that says a pilgrim should be provided for by the general public or made concessions for or supported to go on pilgrimage? It is a private religious matter. If you can save to go on pilgrimage, by all means go. If you cannot, stay home and pray to God Almighty, who in His multiple mercies and loving kindness, hears and answers prayers said in ardent faith, even from one's closet anywhere around the world.

Why have we turned the worship of God into a public burden, a crass commercial venture, where scoundrels milk the treasury in the name of God. Why do we turn a blind eye to the poor flocks of God and junket in the name of holiness? Would it not be holier to spend all that billions for lifting pilgrims to and fro holy lands to lifting our neighbours from oppression, despair and poverty? Why turn the pilgrimage into unholy rogue enterprise, a black market bazaar, for dubious felons to clean out billions in unearned rent? For every $10,000, a killing of N1.65 million can be neatly creamed up in the black market. Now work this out in the millions of dollars. It is scam. It must stop.

I would rather these public funds be put to work, into ventures, projects and productivity that create jobs and pay good incomes from which individuals can save for their pilgrimages rather than waste it on dubious "holy" perambulations across the seas.

One would have thought that the senate president would readily shoot down that greedy call for exchange rate concession by the Hajj Commission and indeed demand that the CBN publish, publicly, the companies or businesses said to be enjoying the N200/$1 rate, a clear devious deviation from the official rate. We need to know why we are breeding, like rabbits, illicit billionaires among the elites at the expense of the great majority of the masses languishing in penury.

And why do this rascality, impunity and roguery in the name of religion thrive and with official government stamp of approval? Simple. Easy petrodollars and a unitary system that funds fraud from the federation account, that rogue cesspool.

To contemplate such rogue exchange concessions for private religious exertions in a sick and ailing economy mired in deep recession, is to be in psychotic denial of our sad reality for ruthless selfish gains. It may be done in God's name. But it is against God. Against integrity, truth and neighbour. It is madness.
Share on Facebook Share on Twitter Share on Google Plus