Today At The Youth Culture Event! By Joy Isi Bewaji 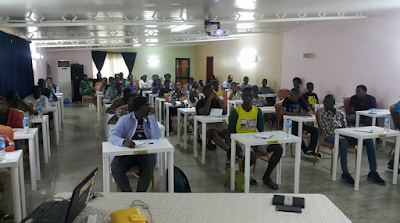 Today at the Youth Culture event - "Let's talk to boys"...

We had boys who've traveled all over the world.

We also had boys trying to raise money for tertiary institution by practising shoe cobbling.

Two extreme social classes... yet we had the most interesting conversations.

One boy said, "If a woman doesn't play her domestic role well, I'll tell her to go and I'll marry another woman." He is 15 years old (PS: you do not blame a child for speaking that way. Ever! He was groomed by society. Teach him differently and he'll learn).

One boy wondered what they should do when a girl dresses skimpily; isn't that an invitation for sex. And if they succumb to such sexual advances, why call it rape?

Another boy wanted to know how to shoo girls away.

Of course, we dealt with these issues thoroughly, and caused a mindshift, hopefully.

A boy shared a story about his friend who couldn't raise N500k for a football trip; so he became a part-time criminal to raise funds. He was caught. Now in jail.

Nse Aruede's son brought me to tears... "There's no hope for us as teenagers in this country," he said, "but thank you for doing this, Ms. Joy."

Seyi Ogundana Eegunnike's son... what can I say? A complete gentleman! In his eyes you will find total peace and confidence. He is sure of his future. When you find a teenager with that kind of calm and optimism, you applaud the parent.

I applaud you, Seyi. I should get to know you more. You are raising a great man. Well done.

The most passionate voice was that of a 16 year old who loves football. He injured his knee at 8years old whilst playing on the field. A jealous opponent kicked him hard for scoring. That dream is gone because he suffers pain. But we showed him other ways he could be productive and successful as a football lover. I also offered him a part time football show on Happenings Radio with a salary. But he already has his mind set to head to Canada. He deserves all the love and well wishes.

Jacqueline shared the victory story of her son's daily survival, after an injury.
*
I finally spoke to Nigerian boys. They had a lot to say. They are smart. They have dreams. They want to explore the world. And they have many questions no one has given answers to.

Today we tried to answer these questions.

Thanks to Evans Ufeli and Osundolire Oladapo Ifelanwa... you were exceptional speakers.

I shall do this again.