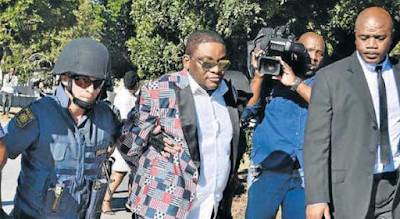 I went back to read the court proceedings of arrested Nigerian pastor complainants from making further public statements or appearances.

Nigerian pastor Tim Omotosho, 58, was arrested sometime in April at a South African airport while trying to flee the country after a possible tipoff by a member of the security agency investigating his sexual trafficking and child molestation ring.

Omotosho hid in the women's toilet of the airport and was allegedly man handled, a treatment he decried in court while complaining of poor toilets in his detention cell; a situation which allegedly made him suicidal.

During the hearing in a Port Elizabeth court, the investigating officer Mr Plaatjies narrated a gloomy tale of Tim Omotosho's mode of operation;

Tim Omotosho was the kingpin of a child molestation ring and he used handlers who were older women in his church to lure vulnerable girls, about 40 of them, with some as young as 13. It was noted that the pastor wanted girls from poor and broken homes, typically girls with no fathers or male relatives who would look after them.

Once the girls met the criteria, they would be paraded in front of the pastor who would pick the most beautiful ones that then get residency in rooms within the church mission houses in anticipation of a sexual initiation by the pastor himself.

The girls accepted would be groomed by his handlers and lavished with money while some other forms of enticement included shopping gift cards for Shoprite, this was to ensure the girls were dependent and loyal to the pastor.

After this initial bizarre sexual fetish, the pastor would on subsequent occasions engage in penetrating sex without condoms. It was revealed that the pastor had unprotected sex with the girls and such risky behaviors in a county battling the HIV pandemic raises questions about the pastor's disregard for public health and safety.

It is also worthy to note that the court denied the pastor's bail application while two of his passports were seized citing fears of being a possible flight risk given a previous attempt to flee the country.

This is also an opportunity to condemn the South Africans who demonstrated in front of the courts demanding his release while praising the bravery of the girls who leaked the news to SABC, such action is commendable because sexual abuse victims rarely report cases especially when pastors threaten them with spiritual curses. Plaatjies also reassured members of the public that the agency was investigating the possibility that its member had tipped off the pastor.
Share on Facebook Share on Twitter Share on Google Plus