The Edelman Trust-Barometer Presentation - Trust in crisis! By Kayode Olagesin 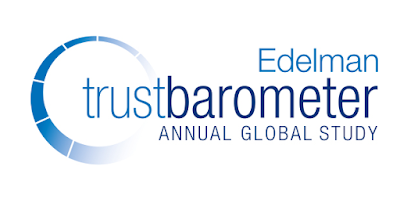 Yesterday I was at the presentation of the Edelman Trust-barometer report for 2017. Edelman Trust Barometer is the Annual Global Study to measure trust across four key parameters of Government, Business, Media and Non Governmental Organizations. The report is based on an online survey in 28 countries involving 33,000 respondents comprising the informed public and mass population, the former being adults between ages 24-64 years who are university trained and in the top 25% income bracket.

In his brief comments before the report, Jordan Rittenberry, Ederman MD for Africa noted that 2016 was remarkable as we witnessed the pervasiveness of Fake News. They concluded, following the review of the 2017 survey, that TRUST IS IN CRISIS. For the first time in the 17 years history of the survey, there was a decline on all four of the parameters measured! The result was presented for the first time in Nigeria yesterday and it is serious food for thought.

Trust has declined in 21 countries of the 28 surveyed with a 3 point drop across board in the Trust and Integrity Index. The result showed that the masses are rejecting established authority and determining how government acts so we see an inversion of the pyramid where the Authority or Informed Public are having to deal with economic and political decisions driven more by popular sentiments. In the summation of the report 'Facts matter less' . According to the report, 52% of people never or rarely change their positions and they believe search engines more than human editors. People believe Social media is more credible than traditional media. Ha! Although, social media also declined, Traditional media shows the steepest decline. Official sources are also suspect and peers are just as trusted as experts. God help us!

Although this survey did not include Nigeria, South Africa being the only African country surveyed, the results very much speak for us. We are in serious trouble. I became somewhat obsessed with truth in public communication as I witnessed an unprecedented level of misinformation in traditional and social media in recent years which shape public perception and of course inform action. Fake news, alternate facts and post truth are new words and phrases that have crept into our lexicon of late for a term which I previously called 'the public lie' adopting Professor Wole Soyinka's definition. It is a matter of concern that feelings now matter more than facts in determining a course of action.

As Isreal Jaiye Opayemi MD of ChainReactions equally noted, the rise of populism has seen the mass population wrestle control from the elite (Brexit and Trump). This has implications as it can sweep governments to power and sweep them out in a whim. There are huge concerns where people are more inclined to trust news on social media with all the fake news and manipulations more than traditional media. The challenge is as a result of traditional media following social media as opposed to setting the agenda and ensuring that they report ' the most credible version of the truth' The Nigerian media must reinvent itself and shake itself from the overbearing influence of Publishers who impose their agenda and politics on the editorial content of their media.

In the keynote address delivered via a video message Mrs Ibukun Awosika, Chairman of First Bank averred that trust is critical for any organization and the world in which we live in. When we can't trust ourselves or institutions then we are in serious trouble, as the populace becomes more susceptible to deceit when trust is broken. Mischief makers are exploiting it and we can see it play out across the world. People even resist what is in their own good as a result of trust deficiency. We therefore need to build a society where trust reigns. I can certainly relate with this and a good example if Nigerians rejecting the very sound reasons that supported fuel subsidy removal in 2012. We are today now dealing with the result of allowing sentiments rather than reason dictate our action.

Corporate Nigeria has a role to play as more people are inclined to trust businesses when they do the right thing. Trust is beneficial to an organization as it can be leveraged. But it also has huge implications when it is lost and as noted earlier, trust also declined with Business as it did with NGO's where other pecuniary motives are beginning to play out. The good news is that when business acts, 75% believe. 37% of respondents believe CEO's are more trustworthy than whilst Heads of Governments with 27%. People even believe more when employees speak as they are seen as more credible spokesperson. So use your employees more to communicate and share their experiences. Social media is a useful vehicle to achieve this.

As I left the presentation yesterday, I asked myself a question, if 'facts matter less' and people are more inclined to believing their peers is an expert on any subject as long as the person is quoting an Internet link, never mind if the information is fake news, why bother? But then I thought you can be that peer sharing information that makes people review whatever information they come across and subject it to scrutiny. In the world in which we live today, it is everyone's responsibility to be a gate keeper and filter information.