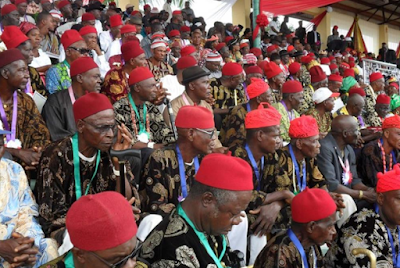 There was that billboard of a certain West-African president who was dressed in an Igbo traditional attire. A loud caption gave meaning:"Igwe!" It was easy to locate the source of that cultural benefaction, credit rightfully placed at the feet of Nollywood, Nigeria's largest exporter of culture and values. Books and the social media can tell the Nigerian story, but none can boast the compelling, even hypnotic power of the movie.

Which is why we should worry about the competence of movie makers—their cultural intelligence and sense of sensational restraint. Their products speak to millions, most of whom are illiterate and poor, but powerful. Powerful in their sheer number, in their capacity to spread a social or religious poison. They are the very agencies often punctual at lynching scenes, consumers of wild superstitions on whom depends the fate of that fellow accused of manhood theft in the local market.

For the most part, the Old Nollywood is run by Igbo scriptwriters, directors, and producers, who are businessmen more than they are artists. For too long we have watched their cultural illiteracy ruin the integrity of much of what stands for Igbo culture and values; we have watched them distort historical facts, fixate on and promote ugly, exaggerated stereotypes, even invent cultural obscenities that do not exist. We have seen Igwes who do nothing all day other than look like frogs on shiny thrones, flanked by two able-bodied human fans, as they condemn villagers to evil forests, when they do not order their deaths outright. We can tolerate such cultural inventiveness for its decorative value, aware that fiction need not be exact and realistic.

But we cannot keep quiet when a false narrative is retold a million times, so much it gains credibility on the streets and becomes a threat to the innocent. In Nollywood, we have repeatedly watched some young person die and suddenly appear in the cupboard of his urban relative, vomiting crisp Naira notes. We have watched rich men eat up the destinies of their layabout relatives, who take snuff and play draughts all day. We have watched strokes, heart attacks, and some other uncommon ailments become the spiritual transmissions of some poverty-stricken uncle. Village elders in uniforms, propelled by walking sticks and evil, their pockets bursting with charms. Traditional priests nearly permanently evil, living among forest plants, eyes circled in chalk, watching their preys in some mirror to strike at any moment, albeit soon to be defeated yet again by some Bible-wielding acrobat.

Sometimes I go to the village and wonder where these diabolical characters have all gone to. Helped by a certain strain of Pentecostal Christianity, Nollywood is filling minds with horrible notions of life, dangerous superstitions that rip families apart, demonizing people's successes, and putting lives in danger. A murder case in Bayelsa recently was quickly tagged money ritual, such that youths went on rampage attacking Igbo lives and property.

This insane cultural perfidy must stop. We intend to raise this conversation and get the industry to self-critique. We will sponsor this page and expose the vandals of truth and tradition among intelligent Igbos and other Nigerians. In South Africa, for instance, many, misinformed by Nollywood, believe charms are part of the Nigerian social iconography. We cannot keep quiet and let a powerful ignorance pollute our story and our standing among forward-looking, educated, 21st-century human beings. Join us!