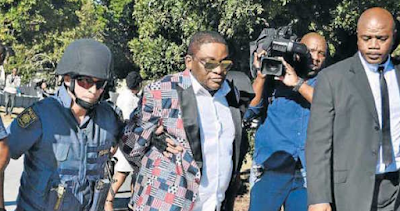 'Prophet' Tim Omotoso was caught hiding in the women's toilet by the South African police.
A shameless criminal who lied to authorities on previous occasions thus prompting the commando style operation.
He will not be granted bail and more charges besides human trafficking and sexual abuse will be levied on the thief.
For a man of god to hide in the women's toilet shows that the pulpit is mounted by shameless people who dress like pimps and are in business because of the easy access to vulnerable women in their congregations.