Igbos Need To Look Inwards And Properly Define The Family

First military coup in Nigeria was led by Chukwuma Kaduna Nzeogwu. It was tagged an "Igbo coup." He was from Delta; he "wasn't Igbo". 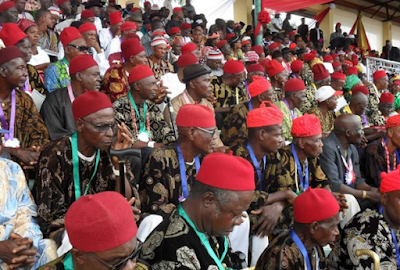 Yet that coup sparked off an ethnic cleansing that saw over 1 million Igbos slaughtered in the North of Nigeria.

Not to mention that the civil war that claimed over 3 million Igbo lives was rooted in the politics of that coup.

Hat-wearing Azikiwe was not Igbo, yet Igbos inherited his odium, suffering political exclusion till date.

Igbos need to look inwards and properly define the family.

All the same it's not entirely an Igbo fault. If there's a fight between, say Igbos and Hausas in the North, machetes will hardly listen to an Emeka who is not Igbo. Nigerians seek ethnic identity mainly in names.

The world is going transracial as we speak. Ethnicity will soon become as politicized and complicated as gender dynamics. Ethnicity can also be an ongoing personal referendum.

The Igbo tribe—no, there's no such thing as "Igbo tribe"—and this is actually the point of this update. It is derogatory to call the Igbo a tribe. The Igbo would have been a tribe some 100 years ago. Not anymore.

I find it offensive to be so described and I just want everyone to note that. Tribes, usually undeveloped and uncivilized, are marked by a land and subsistence economy. Igbo is a nation, only without a state.