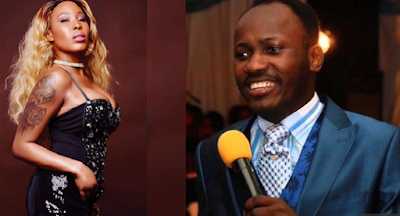 So following the widely publicized allegations that Apostle Suleiman breached his agreement with Stephanie Otobo and was sued for N500 million.

Unlike randy Pastor Fatoyinbo, the apostle's church has already given a "robust response" in a statement which I'll take to be the words of the man of god.

These are the deductions from that official statement;

Apostle Suleiman knew the lady on a personal level.

Apostle Suleiman knew she was a stripper.

He had deliverance prayer for the said lady after which the spirit of prostitution was allegedly destroyed.

He paid her considerable sum of money in dollars so she could abandon her stripping career in Canada.

My concern is not about Apostle Suleiman's kind nature, I am even happy he is paying a stripper to buy her soul for Christ.

I want more strippers liberated and the man of God didn't pay money to a Canadian based stripper for sexual favours.

He gave her money to help her cope with a life after prostitution and nobody can doubt the man of god's kindness.

My concern is simply;

Why would a man who collects N5 and N50 from millions of poor people decide to use that money to fund a stripper in Canada?

Is the stripper's soul better than that of the poor congregants in Nigeria?

Even Jesus intervened on behalf of the prostitute and that was that, he didn't hang around to give her money, he just intervened and went his way.

Apostle Suleiman has once again displayed the recklessness with which Nigerian pastors handle public donations to their organizations.

It's bad to mismanage church funds by gifting people money for the salvation of their soul.