The Rich Are Living At The Mercy Of The Poor 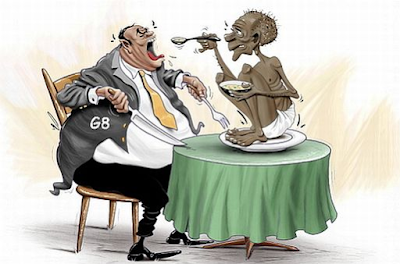 The rich can't do without the poor even in Banana island, the poor outnumber the rich.

The poor are always around the rich, there is no exclusive region of rich people in Nigeria.

The poverty is pervasive that Otedola and Dangote are nothing, absolutely nothing.

They share the same badge that the poor carry, that Nigerian badge of poverty and 300, 000 deaths per year due to malaria.

The rich are living at the mercy of the poor, the poor surround and outnumber them even in supposedly exclusive areas as VI and Banana island.

You can't tell me politicians don't see the poverty around, it's really a matter of inundation but that immersion in poverty creates a uniquely Nigerian apathy for the poor; an apathy distinct from the elitism found around the world.

This apathy is so intense that the rich are happy seeing more poor people die and would rather keep the status quo than help another get up on their feet from the scrubbling floor.

The fear is irrational and premised on the notion that if empowered, poor people would treat rich people same way they've treated them since time immemorial.

The slave trades, the indentured servitude of ancient calabar, the monopoly of political power; these are things that the poor have since forgotten as they usually do in expected amnesia.

The Nigerian elites have never treated the poor fairly in history and contemporary times, what we are experiencing today is not punishment enouh; the deplorable conditions which poor Nigerians find themselves will always be bearable because this is what we have been bred to bear.

The poor Nigerian has a rich evolutionary history to accept slavery and servitude.

Do you think the whites made us slaves?

No, think further than that.

It was our destiny shaped by co-evolution with our African elites. They had already bastardized our humanity even before the first slave ship anchored at quay.

The torture and exploitation of Africa's poor by their elite continued even after the slave trade and that relationship is found in Nigeria today.

The Nigerian badge of poverty and 300,000 deaths per year is shared. Even if you are rich and own a property in Hyde Park, you will always be a Nigerian like the rest of us; our illiteracy and poverty will always be there to embarrass the rich amongst us.

Ibori will always be identified as a Nigerian, a man from that impoverished third world country