Home / local / TERRORISTS IN THE MAKING

TERRORISTS IN THE MAKING 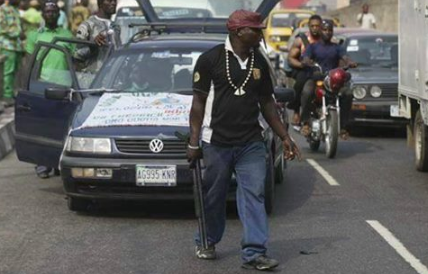 TERRORISTS IN THE MAKING? Really? On the streets of Lagos? and what exactly is the Lagos People looking at while these hoodlums take over the streets in broad daylight? Insanity on display.

This is how the politicians start.... Tomorow, they will tell us they don't know how these kind of terrorists started.

This EXACTLY how Boko-Haram in the North and the Avengers in the East started... now we are watching the creation of our terrorists in Lagos area! The Modus is always the same.

First, the irresponsible politicians use them as political thugs like this (to clear roads, intimidate opponents and steal ballot boxes); and when the politicians finally discard them, as they always do, after winning elections, these guys will then transform to militia and avengers and terrorists bombing innocent people for a living, and then we will all cry and say we dont know what happened?

NOW IS THE TIME TO STOP THESE GUYS BEFORE THEY TAKE ROOT IN LAGOS..... GOV AMBO! YOU BETTER COME AND TAKE CARE OF THIS!

Seriously, somebody please take these terrorists-in-waiting, and especially the CROOKED POLITICIAN THEY WERE GUARDING AND CLEARING ROADS FOR, into some serious Cell Hole! NOW!