How do you want me to have respect for an ideology

You are not your religion, you are rather a human being. 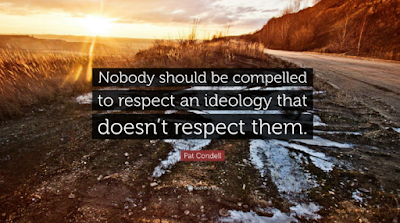 I can question ideas because democracies and human rights are strengthened through the freedom of expression.

How do you want me to have respect for an ideology that allows child marriages because Mohamed did so?

How do you people keep a straight face while seeking respect for religions?

We have an ideology that says a father sacrificed his son, you can't in all honesty tell me that's an ideology worthy of respect.

Indians had the sociocultural ideology of burning widows on their husbands pyre;

Please, how do you sincerely keep a straight face when you ask me to respect such ideas?

I don't know how you do it but I say things as I see it.

I have respect for people but not ideologies, if you feel ideas deserve respect why not ask religions to respect human rights?

Are homosexuals respected in the Catholic Church?

Are women respected in Islam?

You have a choice to speak against or at least not defend bad ideas.