Back in the 90s Kaduna, there were dignified "face me, I face you" apartments in Mando. 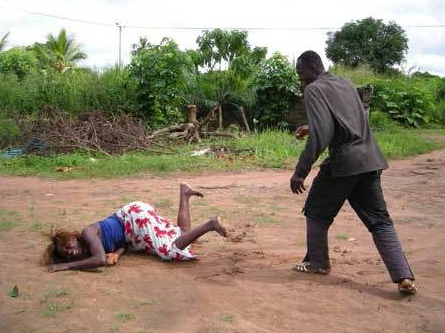 Two rooms and a shared kitchen and toilet. It was terrible for the women who would always come to communal areas to discuss women's rights and domestic violence.

However, when one
man was beating his wife, they others would only scream "no kill am o" from the outside without making any effort to intervene.

This is the tradition in Nigeria, you don't intervene while another man is beating his wife, its "personal family issue" as often would be the husband's answer.

All these 90s women had communal Facebook in their 'face me, I face you' but none of them left their marriages.

They didn't want to become like mama Jimmy the Igala woman who single handedly raised her "wayward" son who happened to be a brilliant student from Kadpoly. The son of a single woman was considered wayward even if he was always helping out the mom fetch water and do other chores.

The discrimination was there from the married women and maybe mama Jimmy was the reason they'd discuss their pity stories on the Facebook of the time which was the communal areas of the 'face me, I face you.'

It's almost as though the women in that 'face me, I face you' complex were addicted to pity stories that they wanted more by going into their various homes to continue the soap opera.

But, the men didn't like Facebook of the 90s. Some would warn their wives not to communicate with other women because a successful abusive relationship depends on isolation of the victim from friends.

Now it's still the case and husbands block their wives from Facebook.

Unlike the 'face me, I face you' were organization was difficult, women can actually organize on Facebook for an #OccupyAbuja march.

No government business until women's issues is put into consideration.