Protesters marching at 14th Street close to the White House and route to the inauguration at the Capital Hill in Washington DC. Both foot and motorized police officers are battling the crowd of protesters with pepper spray. 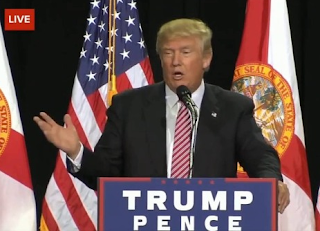 One flag carried by the protesters read: Make Racists Afraid Again. The windows of a Bank of America office was smashed by protesters.

The situation was critical, never before has an American presidential inauguration seen such protests and chaos. This Trump has serious challenges ahead.

Trump is made his inaugural speech. But the speech increasingly sounds like a political campaign address talking about the transfer of power from the politicians in Washington to the people.

He reverts to his usual emperor posturing, campaign rhetoric that everything before him were wrong and that now, the nirvana starts "this moment."

He makes a lot of populist promises. I hope he lives up to the promises. He is back to biting back on his "enemies who talk and talk but do nothing."

Finally, Trump moves into the inspirational and I like this: "Whether we are black or brown or white, we all share the same patriotic blood."

A new era kicks off in America. Let all men pray for the greatest nation on earth.