WHAT CAN ONE REALLY SAY ABOUT THESE PEOPLE IN THE NASS 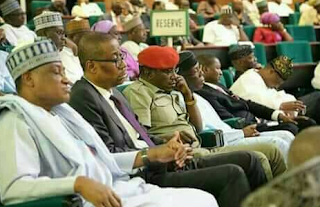 WHAT CAN ONE REALLY SAY ABOUT THESE MEN IN THE NASS SLEEPING DURING BUDGET PRESENTATION?

When I said we have too many LEMONS in this government (Executive, Legislature and even Judiciary), some thought I was being uncharitable to a govt I joined millions to fight for.

These cretins have no problem collecting over N250,000,000 in compensation per year (for those who don't understand naira, that about $500,000 in salaries), but these people can't even seat through a 2-hour budget presentation by their President.

How would we expect them to read it or understand it? How would they know it was padded or poorly added together? Its only when they fight over sharing money they will now tell us budget is 'missing'.