NASS Has Lost Its Collective Mind 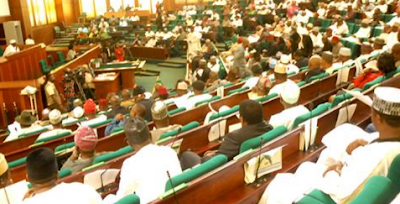 I THINK THE NASS HAS LOST ITS COLLECTIVE
MINDS WITH ITS PROPOSED BILL TO ESTABLISH A CHRISTIAN COURT!...

In fact the idea of a Christian Court is CONFUSING to say the least. Its even more foolish than the situation in Osun State where the government asked young students to dress to school in religious garbs and ended up making the kids looked ridiculous as everyone showed up in school with cassocks, hijabs, Sango dress and guru maharaji dressing

.....Again, we have seen the same provocative thinking that allows Muslim students to wear hijab to Christian Schools but fighting for Christian Courts' is the most ridiculous one yet .

WE SHOULD BE TALKING ABOUT REMOVING INSTITUTIONS OF GOVT RECOGNITION FROM ALL RELIGIONS INSTEAD OF TRYING TO SET UP MORE GOVT STRUCTURES FOR THEM!!

I say 'Shame' on the politicians on all sides who are causing the name of God to be ridiculed among the gentiles with their petty religious rivalry and ulterior motives. I am sure non of these funny politicians pushing for Christian Courts are really thinking about the Christianity or what God wants in this situation.

Yes, We are a SECULAR NATION but our constitution also granted some autonomy to the states on matters of religion. So, if some states want to celebrate Sharia law in their states, I have no problem with that.
The politicians, most of whom are not true Christians but secret cultists, who are talking about Christian Courts should look for a better argument for stopping the spread of sharia than arguing for Christian Court -

Which law exactly will the Christian courts adjudicate?

Sure, Christians may argue we have Ecclesiastical Or Canon Law in the Bible, BUT who has ever practised that since the days of the Crusade? I am not even sure the Pope and Vatican City have strictly Christian courts. So what exactly is going on?