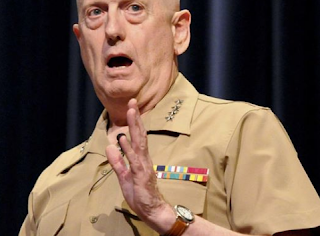 GENERAL 'MADDOG' MATTIS PICKED FOR SECRETARY OF DEFENCE - My only comment is 'Isis and terrorists should START RUNNING!'.... This man does NOT mess around - He will KILL without mercy and smile while doing it.

I must say I personally LIKE this choice! I say this is just what they need in America right now.

A no-nonsense Marine who has a very high moral compass, very professional and compassionate but a stone-cold warrior when it comes down to a fight - He says, Avoid fighting at all costs, but if you must fight, show no mercy.

Somebody gave Trump a Medal Already! He is rewriting the books on how to put together a government BEFORE being sworn in, unlike the tradition in Nigeria where we don't even get ministers names until 6 months...Trump is also showing that he is NOT petty or Vengeful by bringing in bitter rivals into his administration....

I said it before, and i am saying it again, Trump is going to rock this Presidency like nobody expected.... Lets Make America Again.