Home / local / Take Our Country Back

Take Our Country Back 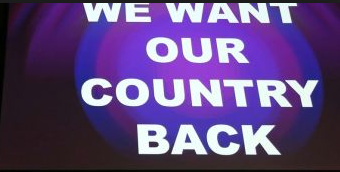 I took the trouble of registering for the APC when the coalition was launched. Such was my excitement at what seemed the beginning of a new dawn.

I overlooked certain shenanigans of a few of the men coming together in what was supposed to be a new order.

But as they opened their doors to all comers, even to people whose political ideologies or antecedents was anything but progressive, I grew worried.

When they threw caution to the winds and started promising Nigerians just about anything to win the election, I knew we were in trouble.

The economy was going ro suffer. They were actually promising to do things that was the opposite of what our realities required.

When their propaganda included outright verifiable lies against the last regime, it was the last straw. Call me old school but the manner of winning matters much to me.

I will contest positions with people, give it.my all and play politics as well but to lie against someone to get a job or business? No, that is certainly not me.

Their lies and the amplification of those lies by those who should know made me a strong advocate for Jonathan.

He might not have been all that but he didn't pretend to be anything than what he is. What we are seeing every day is the unmasking of masquerades who were dressed in borrowed robes.

New political realignments have started and I sincerely hope we will see the emergence of a truly progressive party.

That party does not need to take over at the centre in an Executive capacity but can in a legislative capacity.