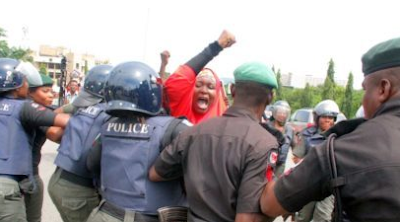 Without prejudice and with respect to the security services advisory, the elections in Edo State has been tainted......

The Nigerian Armed forces has significant assets in the Niger Delta region.
The same Security services determined Edo so safe, that Mr President made his first ever trip since becoming President to an oil producing state....for an electoral campaign.
Yet, the same Security Services now say Edo Elections should be cancelled because of planed attacks.
Like seriously?
What will happen if there is a threat to blow pipelines, will the Security Service ask the oil companies to stop pumping oil?
President Buhari himself promised to guard the oil installations,
So we will secure oil assets but we cannot secure Edo for an election?...is this an admission that even with the presence of military assets, we cannot secure a state?
What APC was attempting to pull off in Edo was to swim uphill. Even in America, without a recession, a popular Obama lost the midterm elections by a landslide....yet APC determined to win an election, in a region sympathetic to the opposition party, while the nation is facing its worst recession since the return to democracy?
All elections are referendums, this election was a referendum on the economy...the APC was going to lose Edo State.....
My post has nothing to do with the political personalities in Edo State, we must realize that failed elections feed into the Nigerian risk pricing which will clearly increase yield demanded on Nigeria bonds, implying our borrowing costs go up and further harm the economy....
Share on Facebook Share on Twitter Share on Google Plus