Is Madam Jonathan For Real 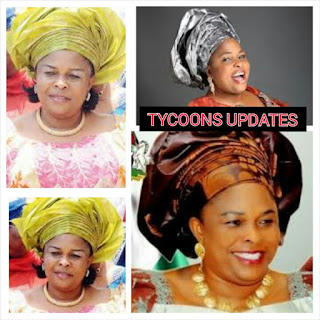 Is she actually retaining some charge-and-bail lawyers to demand the $31,400,000 found in a corporate account, and which the owners have confessed is illegal money, as HER MONEY?
Its only in Nigeria that we elevate absurdity and corruption of the highest order to a serious discussion.

In the first place this embarrassment of a former First Lady should be in JAIL, with serious whipping every morning, for daring to thumb her nose at Nigerians. Herself and her husband looted us blind and are still alive, well and free to tell the tale. Not only did she live to tell the tale, she is now suing our government to recover $31.4million dollars she claimed she earned in 'estacode and business'. excuse me?

Did illiterate Jonathan forget that she was a CIVIL SERVANT FOR THE LAST 20 YEARS (she worked in ministry in Bayelsa State, and even when her husband became President of the country, she insisted on keeping her government job as a Govt worker in her state. She collected salaries and even got promoted to permanent secretary in her state, even while she was wife of the president. So, question is: DID SHE FORGET THIS? Even if she saved 100% of her salaries for 20 years, it’s not up to $1m! Really, one must wonder, is she sick or simply believed that Buhari is so weak politically and cannot call her bluff and dock her?

Did she forget that she does not own any business anyone was aware of? Did she ever indicate this money in her tax returns or asset declarations as a civil servant (her husband may be exempt from tax, she is NOT!)? Did she ever pay any taxes on that $31million? . This is basically giving evidence against herself on Tax Evasion, Money Laundry and Asset Declaration violations (on that one she should be on the dock with Saraki!)

Or Did Madam  Jonathan forget that the money was found in a CORPORATE ACCOUNT of a company where was not even listed as shareholder? The money was seized from a LIMITED LIABILITY COMPANY incorporated under the laws of our nation which gives it a SEPARATE identity form the owners, even if she was one of them, which she was not? So how can company money belong to you? Is it unclaimed dividend to her? The acts of this woman really knows no bounds!

I was just reading a book by Vince Flynn titled ‘Term Limits’. I have too much respect for human life to do anything like that but I can’t help but wish that at some point some guy will get up and start ending the ‘terms’ of some of our politicians permanently the way it was done when one American got fed up with his legislators and took it upon himself to end their terms. Read the book guys…. we may be getting there soon.
Share on Facebook Share on Twitter Share on Google Plus