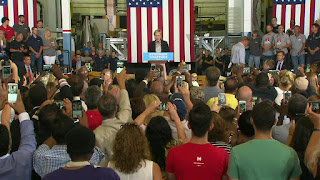 Hillary clinton said during her speech in Warren, Michigan."It would allow him to pay less than half the current tax rate on income from many of his companies. He'd pay a lower rate than millions of middle class families,"

She referred to his tax reform proposal,Trump would slash the income tax rate on all business income to 15%.And that will includes business entities such as limited partnerships (LPs), limited liability corporations (LLCs) and S Corps.
They're known as pass-throughs entities, because the entity itself isn't subject to income tax. Instead, its profits are passed along to its shareholders and partners, who then report them on their individual tax returns.
Today, those profits are taxed at a top rate of 39.6%. Under Trump's proposal, they would be taxed at just 15%.
Financial disclosure documents from trump -- which list all of his assets and businesses interests -- are chock-full of LLCs and LPs.
Share on Facebook Share on Twitter Share on Google Plus